When Olivia Kirk, Director at KKE Architects was approached by WellChild to create a healing garden for children, she required a cladding solution that appeals to all the senses. Bringing visual warmth, a distinctive cedar smell and comforting textures, Silva Timber's Certigrade No.1 Western Red Cedar Shingles met those requirements. This garden was at the RHS Chelsea Flower Show 2014 and won the prestigious Silver Gilt Medal.

We asked Olivia a few questions about the project...

What was your inspiration?

Olivia: As I specialise in creating healing gardens, I was privileged to be asked to design a garden for WellChild, the national charity for sick children, and hope I have succeeded in bringing the work of the charity to life through my design. I wanted to create a feeling of sanctuary at the heart of the garden - an oasis from the harsh realities of life created when caring for a poorly child. The 5 pathways leading from the central space was inspired by the hands in WellChild’s logo. The curved wall wraps protectively around the garden giving protection but at the same time hiding musical treasures, bringing a sense of fun and magic to the garden.

The planting has been selected to pick up on the warm bronze/timber hues in the hard landscaping as well as appealing to all 5 senses, very important when the garden is to be enjoyed by children with a range of disabilities.

Why did you choose Western Red Cedar Shingles?

Olivia: The garden was in the 'Fresh' category which showcases new and innovative design ideas and materials. I originally considered using vertical thatch for the wall which would be a new interpretation of a traditional roofing material using it on a vertical surface. As this was a sensory garden I needed a finish to the wall that was tactile and would bring warmth to the design. It quickly became obvious that this solution would not work within the short space of build time at the show so back on the drawing board and the same train of thought lead to using timber shingles which again is more traditionally used as a roofing solution but translates into the vertical plane perfectly. 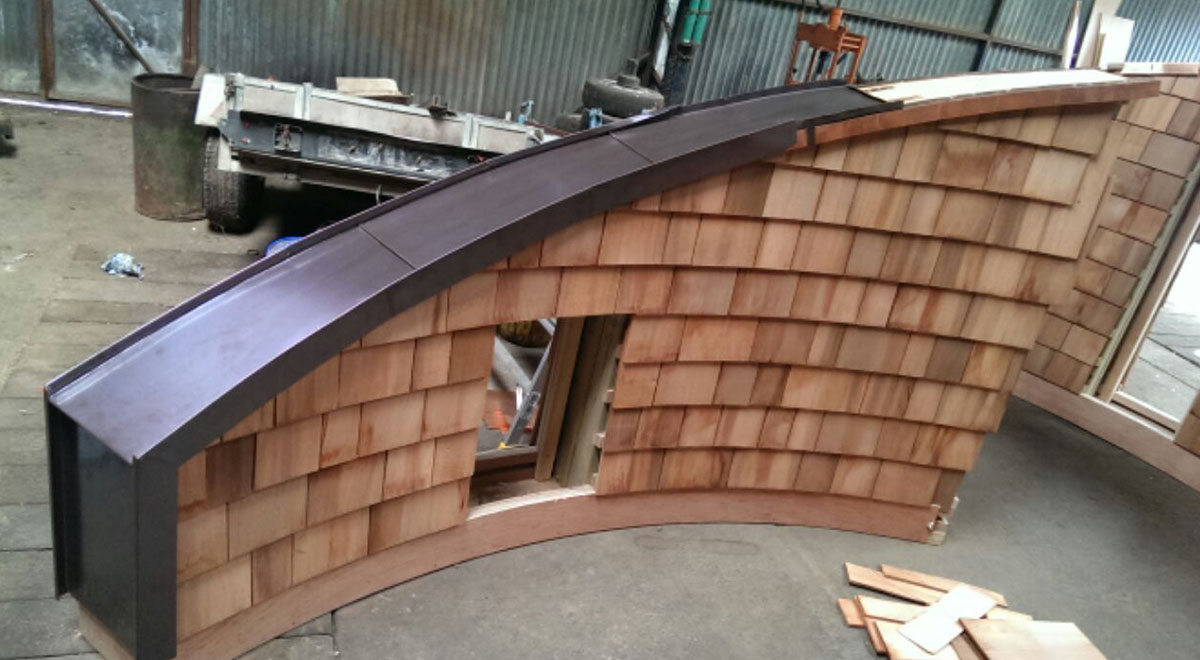 The colour palette of the planting was selected to harmonise with the wood/bronze theme in the hard landscape materials, using jewel-like colours woven into a framework of textured foliage.

Certigrade No.1 Western Red Cedar is the premium grade of shingles suitable for high-end roofs and wall cladding applications. These top-grade shingles are 100% heartwood, 100% clear and 100% edge grain with no defects.

How was it received at the RHS Chelsea Flower Show?

Olivia: The garden was awarded a Silver Gilt medal and received so many lovely comments during the show which attracts 160,000 visitors over the 5 days it is on. It was also featured in many of the BBC evening programmes. As far as I am aware this is the first shingle wall to be seen at the RHS Chelsea Flower Show, Toby Buckland in his BBC coverage described it as weathering from caramel to a "George Clooney grey" over time and said he would love it in his own garden.

The garden has now been relocated from Chelsea to the Brook Special School in Tottenham and was handed over to the school at the beginning of June 2014. It can be seen below:

There are thousands of children and young people in the UK living with a long-term or complex health condition. WellChild is the national charity working to ensure the best possible care and support for all these children and their families wherever they are and whenever they need it.

Silva Timber and KKE Architects have worked together on a number of hospice projects previously, most recently St David's Hospice in Newport, Wales and also Douglas Macmillan Hospice new care units. Olivia explains, "Stephen Roberts has always been very helpful whenever we have new projects to discuss. He was delighted to be able to help us with this very special project for the RHS Chelsea Flower Show."